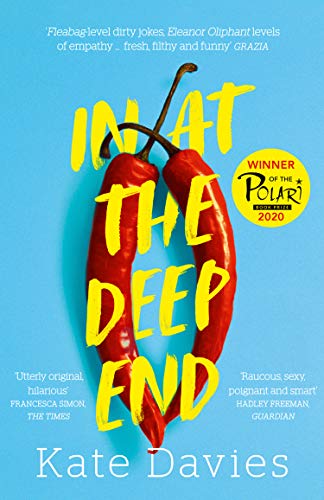 In at the Deep End

Julia’s sexual awakening begins; her new lesbian life, as she coins it, is exhilarating.

A fresh, funny, audacious debut novel about a Bridget Jones–like twenty-something who discovers that she may have simply been looking for love — and, ahem, pleasure — in all the wrong places (aka: from men)

Julia hasn’t had sex in three years. Her roommate has a boyfriend—and their sex noises are audible through the walls, maybe even throughout the neighborhood. Not to mention, she’s treading water in a dead-end job, her know-it-all therapist gives her advice she doesn’t ask for, and the men she is surrounded by are, to be polite, subpar. Enough is enough.

So when Julia gets invited to a warehouse party in a part of town where “trendy people who have lots of sex might go on a Friday night”—she readily accepts. Whom she meets there, however, is surprising: a conceptual artist, also a woman.

In at the Deep End is an unforgettably frank, funny, and racy odyssey through the pitfalls and seductions we encounter on the treacherous—and more often, absurd—path to love and self.