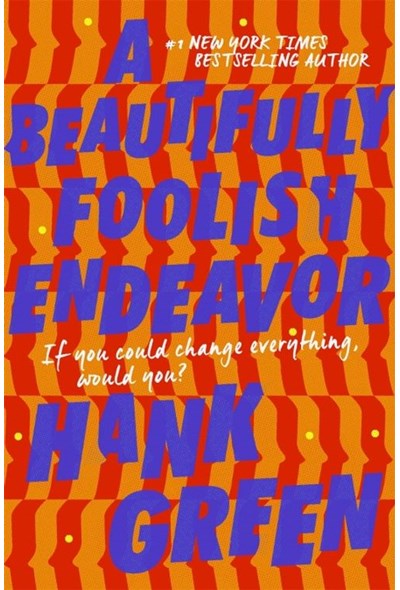 A Beautifully Foolish Endeavor is a bold and brilliant conclusion that asks whether anyone has the right to change the world forever.

The hugely anticipated sequel to Hank Green’s #1 New York Times bestselling debut novel, An Absolutely Remarkable Thing! – The statues disappeared the same way they appeared, in an instant. While they were on Earth, they caused confusion and destruction without ever lifting a finger. Well, that’s not exactly true. Part of their impact was the untimely death of April May: a young woman who stumbled into their path and named them the Carls, gaining viral fame and putting herself in the middle of an avalanche of conspiracy theories.

Now, the world is as confused as ever. Andy has picked up April’s mantle of fame, speaking at conferences and online about the world post-Carls; Maya, ravaged by grief, begins to follow a string of mysteries that she is convinced will lead her to April; and Miranda infiltrates a new scientific operation . . . one that might have repercussions beyond anyone’s comprehension. As they each get further down their own paths, a series of clues arrive – mysterious books that seem to predict the future and control the actions of their readers – which seem to suggest April may be very much alive . . . But there’s a new threat. A growing force that wants to control our reality. Did the Carls ever really leave us, and what happens if they’re here to stay?

A Beautifully Foolish Endeavor is a bold and brilliant conclusion that asks whether anyone has the right to change the world forever.